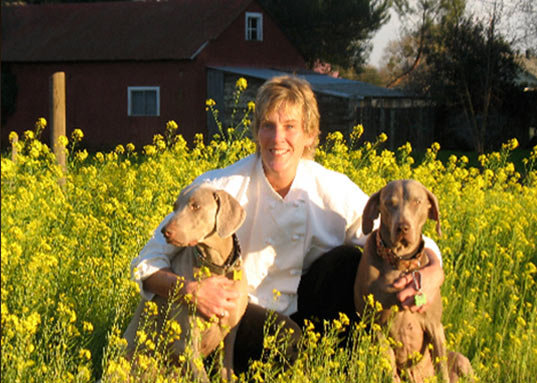 Heidi West was raised in Marin County, CA. She moved to Santa Monica where she went to school studying Commercial Art and Design. She received an AA degree in Graphic Design and a BFA in Commercial Illustration from Cal State Long Beach.

Taking a breather from college life Heidi got a job cooking on chartered luxury yachts in Southern California. That's where her culinary roots were established. Her love for the sea prompted her to get a private chef's position aboard a 92' sailboat which took her on an amazing culinary journey around the world for 31/2 years. She explored hundreds of international farmer's markets which inspired her to study and cook each country's regional favorite dishes. She kept a journal of all of her menus and likes to incorporate her memories of the past in her menus of today.

When Heidi returned home from cooking abroad she set her eyes on the Napa Valley where all of the new culinary stars were rising. She cooked for the premier catering companies and wineries for 18 years before deciding to branch out on her own.

Heidi also owned and worked an organic farm in Sebastopol for 4 years. She incorporated her freshly picked produce in all of her menus and also sold her produce to chefs in Sonoma and Napa Valley.

Heidi has cooked for many celebrities over the years: Candice Bergen, Whoopi Goldberg, George Bush Sr., Governor Gavin Newsom, Netflix, Google, Microsoft, Francis Ford Coppola & Margrit Mondavi, to name a few. She worked as a private chef for Irene & John Scully in Marin County and for the owners of Chalk Hill Winery in Healdsburg.

Heidi currently lives in the Sonoma Wine Country in Healdsburg, CA. on 16 acres of beautiful vineyards with her two Weimaraners, Spencer & Porter. She loves to be active and outdoors. Tennis, cycling, kayaking & boogie boarding are just a few of her passions. Heidi is also an avid Printmaker and belongs to an advanced printmaker's group in Santa Rosa called "The Studio."